Several years ago, my good friend Maria Savvenas was a guest chef at Harter House World Flavors Sampling Station she demonstrated how to make Spanakopita, a Greek Spinach Pie.

At that time, I had eaten it before but had never made it myself. So I watched her put them together into small triangles and of course, she made it look SO easy. So I purchased all the ingredients and decided I would attempt to make them at home. Which I did do.  It was time consuming, it took me at least 3 hours, but OMG, it was so worth it. I did get faster the next time because I then had a better understanding of the process. The time consuming part is taking the Fillo Dough, one sheet at a time, and basting each sheet with butter, using 4 sheets for each triangle, and trying to get them right on top of the 1st sheet.  Today I feel like a pro.  I make it often, my family loves it, and I love to take it when I need to "bring a dish" to my holiday parties. 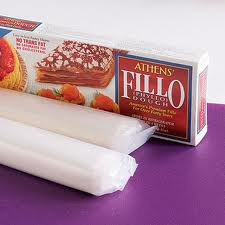 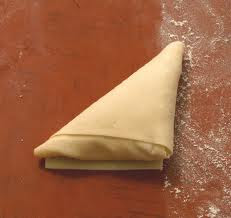 Maria also told me that if I want to make a lot for a large group that I can use a 9x13 pan, putting phyllo dough on the bottom of the pan, then the mixture, another layer of Fillo Dough and mixture, and top with more phyllo dough sheets. Same process of buttering each layer. 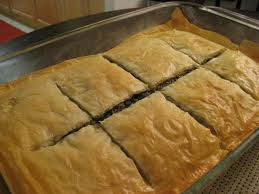 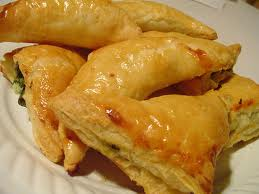 1) Remove fillo from Freezer and put it in the refrigerator overnight to thaw. As you prepare the filling, remove fillo from the fridge and leave on the counter
2) Sauté onion, leeks, green onion and garlic over medium high heat until softened. Add Spinach, wilting the leaves. Remove pan from heat. Add Salt, pepper, dill, and feta mixing well. Then add slightly beaten eggs, stirring well – to blend the ingredients. Set mixture aside.
3) Unroll fillo dough from package. Lay it out flat on the countertop. Wet a dishtowel to cover the fillo you are not using to keep it from drying out. Use a sharp knife to cut fillo in half lengthwise to create two columns of equal size. Cover one column with a damp towel. Use other column to begin assembling. 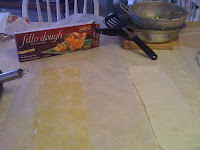 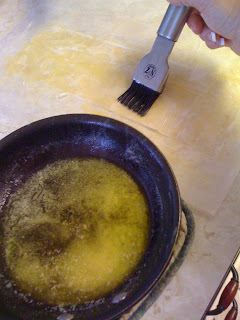 4) Take one sheet and brush with melted butter, and then place another sheet on top of the buttered side and brush with butter again. Repeat until you have four layers of fillo.
5) Place butter fillo in front of you lengthwise. (The wider side toward you) 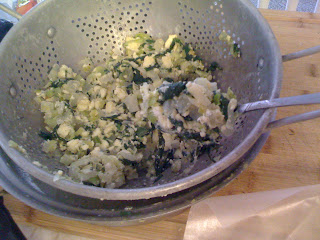 Drain spinach mixture in a colander. Press mixture with the back of a spoon to remove excess moisture. Take a Tbl. of spinach mixture and place it on the bottom inside corner of the fillo. Take the corner of the dough, underneath the spinach mixture so that the corner meets flush with the other side. Continue folding until there is no more fillo and you have a triangle.
6) Repeat until fillo or mixture is gone. Place on a baking sheet and brush each triangle with more butter
7) Bake at 350 for about 30 minutes or until the fillo dough is golden. 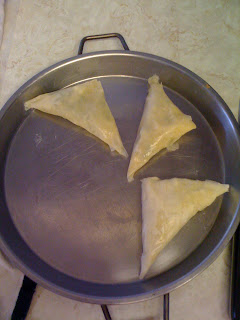 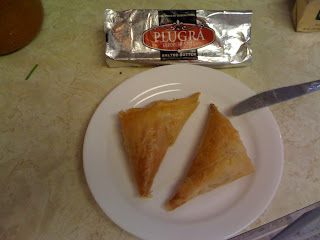 Find everything you need at Harter House
and Harter House World Flavors.
Posted by Shelly Kauffman at 8:00 AM