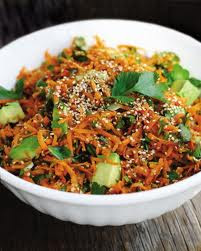 Once in a while I have to choose something healthy rather than rich and indulgent.  I have enjoyed this salad many times.

If you love salads but are tired of making the same old leafy greens with vinaigrette dressing this recipe is for you! It is time to try something new. Break away from a purely green salad, and try adding some excitement to your normal eating routine. This is a very quick recipe that anyone can make.
Serves 2 people

For the dressing:
2 TB Flax seed Oil
2 Limes
1 1/2 TB Soy Sauce
1 TB Ginger
1 TB Coriander
Method:
For the salad:
Step 1: Chop your Cilantro, Parsley, and Carrots. You can also use a grater for your Carrots.
Step 2: Mix all three into a medium size bowl.
For the Dressing:
Step 1: Place all the dressing ingredients into a food processor.
Step 2: Mix until everything is well blended
Step 3: Pour dressing on top of the salad
Step 4: Toss on the 1/2 Cup Sesame Seeds
Recipe by Julie Morris

Posted by Shelly Kauffman at 9:40 PM No comments: 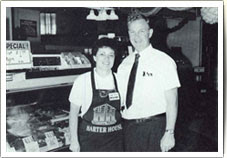 You cannot talk about the success of Harter House, without recognizing the contributions and leadership of Jerry and Barbara Bettlach.

The Bettlach’s started small, very small. In 1973, the first Harter House was only 15 feet wide and it had meat cases so old that they had incandescent bulbs instead of fluorescent bulbs. Jerry and Barbara’s 1st day sales were $111. From that point things just got better and better.

Jerry Bettlach learned his meat cutting skills from his father and uncles, starting at the age of 13. His grandfather, who had migrated from Eastern Europe in the late 19th century, opened the first meat market owned by the family in St. Louis, Mo.
“We still make bratwurst and several homemade sausages from recipes passed down through generations." 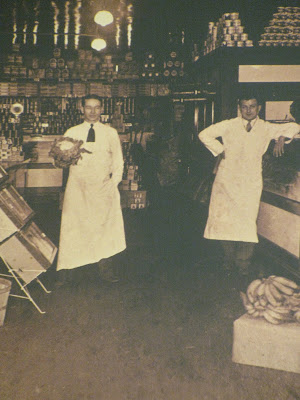 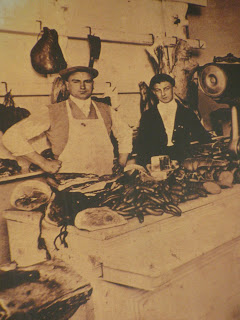 Throughout his meat-cutting career Jerry’s experience included all full service and then later all self-service merchandising, but Jerry always knew that what the customers really liked was full service, so that was what he decided to build his business on. 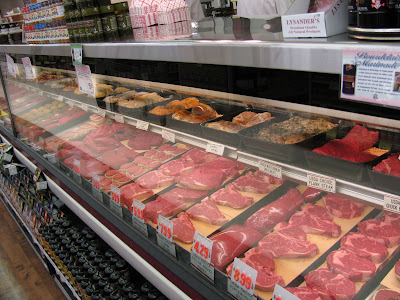 Jerry and Barbara’s approach to doing business was, “We want to be known for quality, friendliness and good service to our customers, and to be liked and respected by our employees.” When talking about our meat products, “We are determined to market only the highest quality available in meat and meat products.” Barbara explained, “We believe the key to customer service and satisfaction is to make the effort to get to know the customers and their likes and to provide exceptional products and service.”

In a highly competitive market, we’ve experienced steady growth over the past 43 years with very minimal advertising through most of those years. Our experienced employees merchandise meat, produce and many other products without worrying about the competition.”


If there is one thing that we can point to that might account for the growth and success of Harter House, Barbara noted, “Just good employees that stick closely to the basics of the business – quality products and exceptional service. And they consistently give 100% every single day! We have several long term employees and that enables us to just do “what we built the business on” a little better every year. There is no substitution for experience. 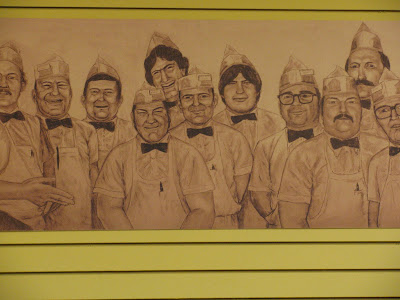 This picture was drawn by past employee Joe Bauer in 1977, and a copy hangs in every store location today.  Joe has gone on to be an Oscar and Emmy winning Special Effects Supervisor for his work in many major motion pictures and most recently receiving accolades for Game of Thrones.
Pictured here from Left to right is;
Butch Bettlach, Jerry Bettlach, Dale Dothage, Clifford White, Rick Kutz, Don Ivie, Chris Graham, John Lemmons, Mike Macchi, Tom Tipton, and Vince Graham.

How many of these men do you recognize?
How many are still employed at Harter House?
Butch is in Hollister, John still works at Republic Road in Springfield, and Dale just recently retired.

You can’t just throw meat into the service case and expect it to sell. Presentation is of paramount importance. A lot of hard work goes into making meats and other perishables look well merchandized and appetizing. Harter House meat cutters definitely have the experience. Any cut of meat a customer wants, we will customize cut. Many supermarkets don’t have butchers with the talent to custom cut and then also cut and merchandise what is remaining after a custom cut. 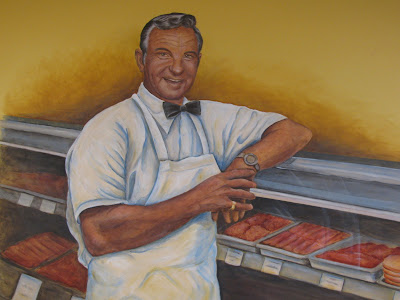 When asked what Harter House has, that the average supermarket does not, Barbara Bettlach replies, “Service, Service, Service.” Also important is ever-present personnel.
Throughout the store it is our intent that you will be greeted 6 to 8 times from every employee you come into contact with. “How can I assist you today?”
In other supermarkets, meat cutters are encouraged to wait on customers as fast as possible so they can get back to cutting meat, what they were hired to do. Harter House butchers are always present to help customers. You'll never be asked to ring a bell for assistance.

Customers depend on Harter House butchers to tell them how to prepare various meat cuts. All butchers are trained to be knowledgeable and helpful.

Harter House stores will always be smaller stores because customers are glad to find a place they can be waited on. They can go to the same large chain for 10 years, and no one will know their name. “We remember names,” Barbara Bettlach says. “It’s part of our business.” 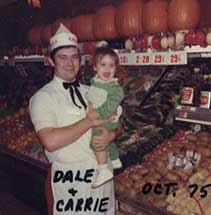 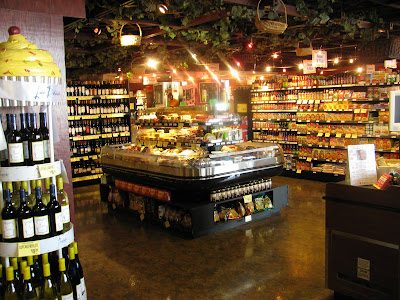 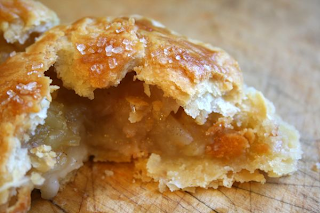 
You can use this flaky, flavorful easy-to-roll dough for pies, turnovers or even tarts. If — heaven forbid — you could have only one dough for crust in your repertory, this would be the one to choose.

You'll need a large-capacity food processor to make a double crust. If your machine isn't large enough, make the dough in two batches.

Put the flour, sugar and salt into a food processor fitted with a metal blade; pulse just to combine the ingredients. Drop in the butter and shortening and pulse only until the butter and shortening are cut into the flour. Don't overdo the mixing — what you're aiming for is to have some pieces the size of fat green peas and others the size of barley. Pulsing the machine on and off, gradually add about 6 tablespoons of the water if making a double crust, 3 tablespoons if making a singe crust — add a little water and pulse once, add some more water, pulse again and keep going that way. Then use a few long pulses to get the water into the flour. If, after a dozen or so pulses, the dough doesn't look evenly moistened of form soft curds, pulse in as much of the remaining water as necessary, or even a few drops more, to get a dough that will stick together when pinched. Big pieces of butter are fine. Scrape the dough out of the work bowl and onto a work surface.

Refrigerate the dough for at least 1 hour before rolling. (If your ingredients were very cold and you worked quickly, though, you might be able to roll the dough immediately: the dough should be as cold as if it had just come out of the fridge.)

TO ROLL OUT THE DOUGH: Have a buttered 9-inch pie plate at hand.
You can roll the dough out on a floured surface or between sheets of wax paper or plastic wrap or in a rolling slipcover. (I usually roll this dough out on the floured counter.) If you're working on a counter, turn the dough over frequently and keep the counter floured. If you are rolling between paper, plastic or in a slipcover, make sure to turn the dough over often and to lift the paper, plastic or cover frequently so that it doesn't roll into the dough and form creases.

If you've got time, slide the rolled-out dough into the fridge for about 20 minutes to rest and firm up.

FOR A DOUBLE-CRUSTED PIE: Fit one circle of dough into the pie plate, allowing the excess to hang over. Trim to a 1/8- to 1/4-inch overhang. Fill the pie and moisten the edges of the bottom crust with water. Center the second piece of dough over the filling and press it against the bottom crust. Using a pair of scissors, cut the top crust's overhang so that it extends about 1/4 inch over the bottom crust. Tuck the excess top crust under the bottom crust and flute or pinch the crust to make a decorative edge. Alternatively, you can seal the doubled-up crust by pressing it with the tines of a fork. Follow the pie recipe's instructions for baking.

FOR A SINGLE CRUST: Fit the dough into the pie plate and, using a pair of scissors, cut the excess dough to a 1/4- to 1/2-inch overhang. Fold the dough under itself, so that it hangs over the edge just a tad, and flute or pinch the crust to make a decorative edge. Alternatively, you can finish the crust by pressing it with the tines of a fork.

TO PARTIALLY OR FULLY BAKE A SINGLE CRUST: Refrigerate the crust while you preheat the oven to 400 degrees F.

Butter the shiny side of a piece of aluminum foil, fit the foil, buttered side down, tightly against the crust and fill with dried beans or rice or pie weights. Put the pie plate on a baking sheet and bake the crust for 25 minutes. Carefully remove the foil and weights and, if the crust has puffed, press it down gently with the back of a spoon. For a partially baked crust, return the pie plate to the oven and bake for about 8 minutes more, or until the crust is very lightly colored. To fully bake the crust, bake until golden brown, about another 10 minutes. Transfer the pie plate to a rack and cool to room temperature before filling.
Posted by Shelly Kauffman at 10:25 AM No comments:

I'm always looking for new ideas for Tasty Chicken Recipes.  This recipe, I am very excited about.  Be sure to add it to your family's menu for this coming week!!!
Find everything you need at Harter House and Harter House World Flavors! 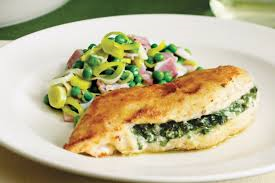 Lay one breast on a clean cutting board.
Use a paring knife inserting it gently into the thickest tip of the breast.
Make a horizontal incision in the breast, be careful to not cut through to the sides.
Use your fingers to deepen the cavity made by the incision.
Repeat process with remaining breasts.

Fill a pastry or Ziploc-style bag with basil-ricotta mixture.
Trim tip of bag then insert it into the the cut side of the chicken breasts squeezing in an even amount of filling into each.

Dredge stuffed breasts in flour mixture, evenly coating each side.
Heat olive oil in a 12-inch oven-safe skillet over medium.
Lay each breast top side down in the oil, brown for approximately 3 to 5 minutes.
Gently turn chicken over then place skillet on middle rack of oven and bake an additional 20 minutes.