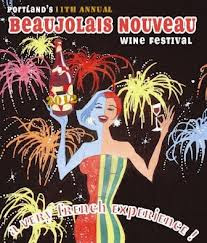 
At the strike of midnight on the third Thursday of every November, France erupts in massive celebration in honor of the unveiling (or should we say uncorking) of the Beaujolais Nouveau wine.

Beaujolais Nouveau, which is a young wine (only 6 weeks old) comes from a region south of Burgundy in France. It’s rumored that the light-bodied and fruity wine must be finished by Christmastime and the French government has put regulations delaying the wine’s release until the third week in November. This means the arrival of the new Beaujolais is warmly welcomed in France.

All over the country, grand traditions have developed in honor of the release of the Beaujolais, with the biggest festival taking place in Beaujeu, the capital of the Beaujolais region. This little city springs to life during this weekend in November, hosting a massive party called Sarmentelles. The party gets its name from the french word for cuttings from the canes of grapevines called sarments, which are burned in the center of town just prior to the grand midnight unveiling. Then the huge barrels are opened to much fanfare and party-goers indulge in the new wine for the festival’s 3 day duration.

Other areas in France also boisterously celebrate the arrival of the Beaujolais Nouveau. Lyon hosts the Beaujolympiades (Beaujolympics), marking the release of the wine with music and fireworks followed by 2 days of sampling. In Paris, restaurants and bistros host their Beaujolais Nouveau parties, staying open through the night and uncorking hundreds of bottles after midnight.

Wherever you may be traveling in France, this is a great night to celebrate life, wine, and a grand French tradition.

Beaujolais Nouveau is made from handpicked Gamay grapes grown in the Beaujolais region of France, where the beverage accounts for half of the region's production.

While most red wines improve with age, Beaujolais Nouveau is all about freshness.

Many producers, including regional giant Georges Duboeuf, race to deliver the first of the vintage to celebrations throughout France and the world. Under French law, the wine may be released at 12:01 a.m. on the third Thursday of November, just weeks after the wine's grapes have been harvested. Fermentation is so short that the resulting wine exhibits fruity flavors and light tannins.

Beaujolais Nouveau should be consumed right away (or within a year of being made), and is best served slightly cooled. Nearly half of the wine's 70-million-bottle production is exported abroad, mainly to Japan, Germany and the United States (where it is popularly enjoyed with Thanksgiving dinner).

Tasting Notes
Generous notes of strawberry and black currant dominate the nose, with silky tannins that bring smoothness to the palate. The long finish has subtle touches of sweet Griottine cherry.

Pick up your celebration bottles of Beaujolais Nouveau at Harter House Supermarkets.

Posted by Shelly Kauffman at 10:00 AM No comments:

I took notes along the way on this tour.  I am Shelly.  I am attending a Grocers Getaway with 3 others from our business, Harter House Supermarket. My notes are hand written, at times in my own form of shorthand.  So I had to rewite my notes in order to retain them as accurately as possible.  And I looked up spellings of things I wasn't too sure of.  But I hope you enjoy it.  I enjoyed providing and sharing it with you. 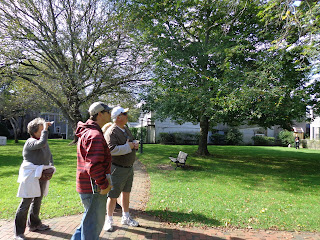 We start our "Walking Tour" with Mike at the Edgartown Paper Store which he either owns or works at.  He starts talking as we walk down the street.  We take a path walkway between two houses.  There we find a park.  At least 6-8 houses back up to the park with no fences.  It's very nice.  We stay here for a bit while he gives us some history of the area.


This is the largest island on the east coast that you can drive to (by ferry).


An English explorer in 1602 came to this area looking for sassafras to cure illnesses back in England.  He wanted to claim the land for Europe.  They found fresh water and what they thought were grapes.  This explorer had a mother and a daughter, both named Martha.  So he named the island Martha's Vineyard. 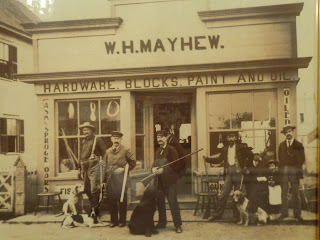 About 40 years later the Mayhew family settled.  There are still Mayhews living on the island today.


In 1642, Thomas Mayhew Sr. came to Martha's Vineyard.  As the English came, the Indians went "up-island", settling near Aquinnah.  .   The Wampanoag Tribe is 800 strong today and still living in that area.

Edgartown area was, at that time, called "Great Harbor"


1671 - Thirty years later, Great Harbor wanted to be incorporated with England.  They asked for the name Edgartown after the three year old prince Edgar that would someday be king.    With their incorporation came a letter thanking them for paying their respects to the late prince.  This is the only Edgartown in the world.


In the late 1700's the men went on whaling expeditions.  They would be gone weeks, months, even years at a time.  The captains lived in Edgartown in the early 1800's.  Whaling boomed from 1830 to 1865, until whale oil was no longer needed due to the discovery of petroleum.  Edgartown then became a ghost town. 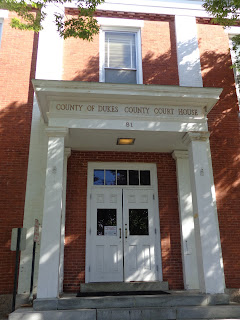 County of Dukes
County Court House
Ted Kennedy was arraigned here,
but never convicted of anything. 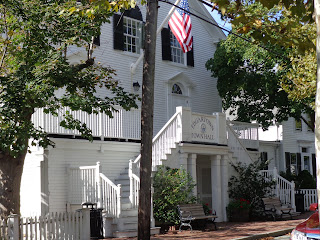 The Town Hall was first a Methodist Church.  Later it was the Fire Department.
It sits atop a hill so it was downhill to get to any fire.  Then it became the town theater.
Now it's the Town Hall. 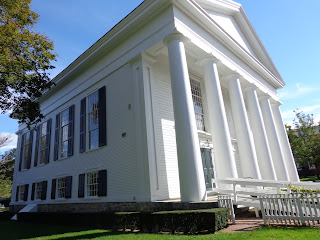 1843 to 1847 - The Old Whaling Church, a huge Methodist church, was built.  The Clock Tower was dedicated to Captain Peaze.  Captain Peaze died before the church was finished being built.


It has 120 pews and holds 850 people.  Today it is non-denominational and sometimes serves as the Performing Arts Building.  It is also, second only to Las Vegas, as the most popular place for weddings. 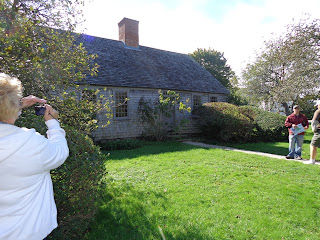 We continue to walk to the Vincent house.  Built in 1677, it is the oldest house on the island. Vincent's lived in the house until 1970.   In 1970 the house was moved to this location, next to the Old Whaling Church and Dr. Fisher's house, from the center of the island.  It is the oldest unaltered structure and is currently a museum. 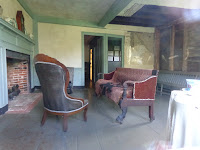 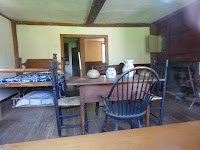 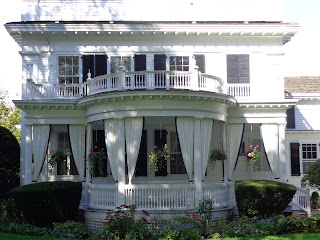 Dr. Fisher's house was built in the 1840's. Dr. Daniel Fisher practiced medicine in Edgartown. In 1829, he married Grace C. Coffin. She was the daughter of a wealthy whaling-ship owner. Dr. Fisher soon discovered that there was more money to be made in whaling than in making house calls. He built a whale-oil refinery, a spermaceti candle factory, a bakery to supply hard-tack biscuits to whalers and an up-island mill to grind hard-tack flour. He was founder and president of the island's first bank.


"Coffin" is another known name on the island.

Mike said, "He was very well respected, the most handsome, the most rich."
Personally, I don't see it.
"One story says when he died he donated half his wealth to the town to start a preservation society.  The other half was to be split between his wife and his mistress.  His mistress would be wearing a scarlet red dress at his funeral." 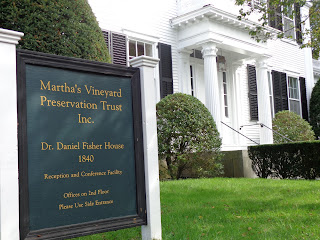 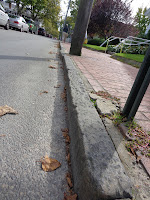 As we continue to walk,
Mike points out the original granite curbing dating back to 1868. 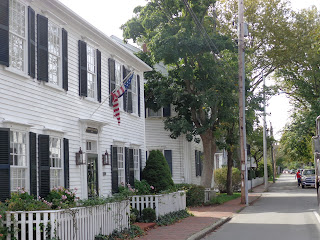 Martha's Vineyard is known for the black and green shutters and the 3 foot tall white picket fences.


Mikes points out anchors in the street where they used to hitch horses. 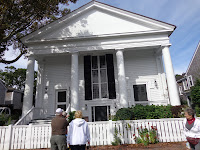 The building with 4 pillars was a church, now it is a residence. 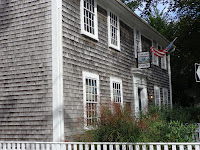 The Vineyard Gazette is the oldest newspaper on the island.
It is still active today. 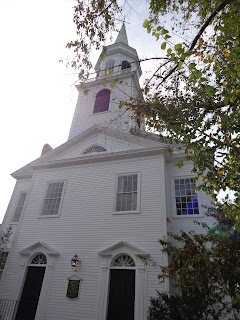 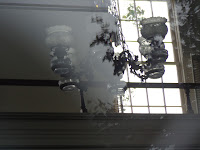 When it was built, there was a long open field in front of it, an entire block back to main street.

The Mayhew Family owned all the water front property. A grandson to Captain Peaze lived in the house across the street, with the red door.

On the waterfront, across the street,  is 2 lovely homes with a vacant lot between them. 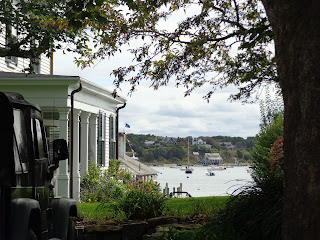 After his death, another structure started to go up and, when it was almost finished, it too burned.  So today, it is a beautiful area of open land. 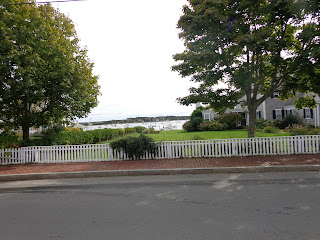 Herman Melville, who wrote the book Moby Dick, also stayed at this house, with Captain Peaze, while he was writing Moby Dick.  It is said that Captain Peaze, the grandson, is the inspiration for the character Ahab. 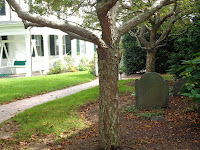 Thomas Mayhew, Sr. is buried in the front yard of this next house. 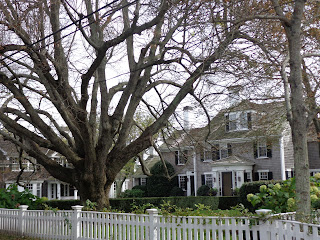 This huge tree is a Little Leaf Linden Tree. 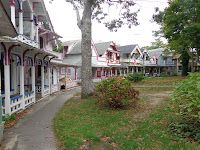 Mike is still narrating our tour;


The first wave of tourism was in Oak Bluffs in the 1860's .The Oak Bluff Cottages are there.
8 years later, people were coming and building homes.
(We will visit here later today)


In the late 1960's, business and tourism was very slow. That's when Paramount Pictures asked if they could film the movie Jaws here, about a shark terrorizing paradise.  It was the summer of 1974.  City planners were hesitant, but it proved to resurrect this area. 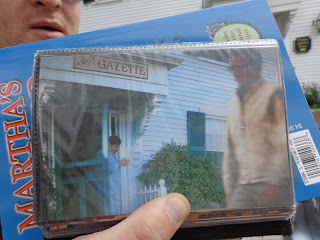 The movie crew incorporated many residents and even crew as extras.  The movie's screen writer is coming out the door of The Gazette.

This is the house that served as The Gazette. 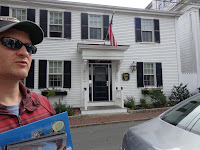 Looking through a window we see a plaque for Amity National Bank.  Mike offers a "Jaws" tour as well. 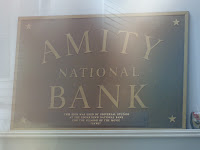 1969-74 - the area became known for the incident that happened on the island of Chappaquiddick.

This area has always had a reputation of being the playground for the rich. 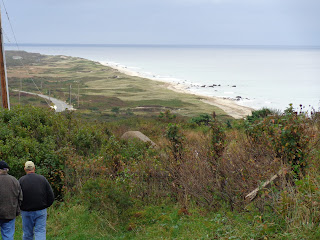 Debris, from John F. Kennedy Jr's airplane, was found on Gay Head Beach.  Most ship wrecks are off of Gay Head.
(We will visit here tomorrow)

There's not much crime here.
There are fresh water ponds all over the island.

This concludes our tour.

Next we visit the book store and have lunch at The Newes From America Restaurant.
Wonderful! 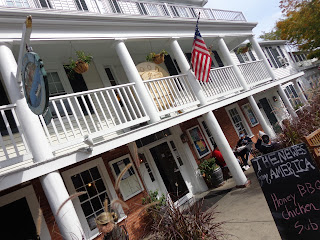 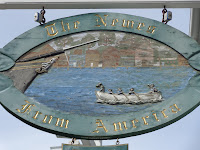