Sept 4, 2017 is Labor Day, and on this day many will be getting together to enjoy food, drink and the waning days of summer.  A celebration of the America worker, Labor Day was first celebrated in 1882 in New York City. By 1885, municipal ordinances were passed declaring the day an official celebration. By 1887, Oregon had become the first state to pass legislation declaring Labor Day a holiday.  In 1894, the U.S. Congress made it official.

Like most national holidays in America, the driving force behind the celebration is food.  Say goodbye to summer with the season's bounty of fresh fruits and vegetables. That means sun-kissed tomatoes, sweet corn and juicy berries, as well as other warm-weather favorites like lobster, steaks, ribs and anything else you can throw on the grill, of course purchased from your local neighborhood Harter House Supermarket.   Kebabs are a great way to combine your favorite meats and veggies in a cool, colorful package. Served with a few simple sides like orzo salad and cucumber salad, they're easy to prepare and to clean up.

Dessert could be a messy but delicious make-your-own-sundae bar, a fresh fruit cobbler or a berry crisp. 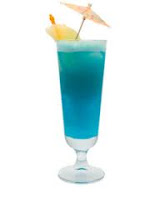 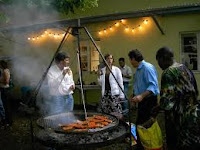 In the spirit of Labor Day, encourage your guests to really relax by filling your outdoor area with hammocks, comfortable lounge chairs, lawn blankets and lots of pillows.  Like 4th of July, patriotic decorations dominate for Labor Day, but in addition to the stars and stripes, the slight chill in the air means you can also decorate in warm, earth tones and rich oranges, golds and yellows.   Tiki torches, twinkle lights and candles in hurricane lamps keep things bright if your party lasts into evening. And don't forget the citronella candles to keep any flying critters away.

Posted by Shelly Kauffman at 10:15 AM No comments:

My high school girlfriend, Cathy, and I visited her relatives in Susa, Italy.  It is in the Italian Alps, just a stone's throw from France.  We were being hosted by Gigi (Pier Luigi Tournour) and his wife Imene, (pronounced Eman)  Imene is from Tunisia, Africa, and married Cathy's Cousin Gigi seven years ago.  She is a great cook, and treated us to delicious meals in their home.

They have a truly lovely home, which was their family home.  Cathy's grandfather was born just up the hill in the town of Gravere.

Actually, The Weather Channel App says we are in Gravere, and Susa is the town at the bottom of the hill.

Quiche is one of my favorites and Imene gave me her recipe.

Mix all together, add water as needed.  Roll out flat and refrigerate 30 minutes


Bacon - Prepare, diced and cooked.  Remove bacon from grease and set aside.
Onion and zucchini - cook diced onion and zucchini in bacon grease.  Set aside.
Three Cheese - Parmesan, Mozzarella, and one other varietal such as Cheddar, Gouda (a dutch yellow cheese with a little nutty flavor), Emmental (swiss), Gruyere (another smoothe melting swiss)
Cheese is grated or thin slices.  ( a cup of each?)
5 eggs - beaten and then mixed with cheeses, bacon, zucchini, and onion.

Put crust in a pie dish with the egg and cheese mixture, and bake approx 180 degrees Celsius (Centigrade) for 40 minutes, which would be about 350 Fahrenheit.

Purchase everything you need at Harter House Supermarkets. 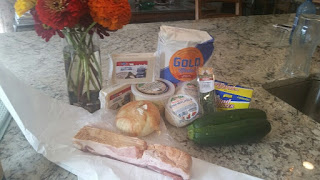 I also used 3/4 cup water for my crust.  I needed to add a little flour to the the waxed paper when I rolled out the dough, because when I removed the crust from the fridge, it was still pretty sticky.  Maybe I needed a little less water to start with.
But it turned out great!  I was SO happy.  It was delicious!

Another family member living in Susa is Gigi's sister, Anita (Anita Tournour Viron), and her husband Luca Gontero.  Luca manages a Rock Climbing company and their son, Leonardo Gontero, will represent Italy in the next Olympics in the newly added sport of Rock Climbing.  And I can say, I know his mother! 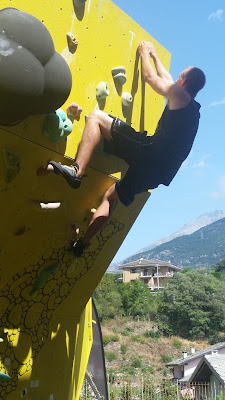 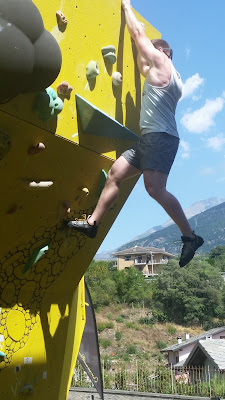 Brad and Mat were invited to climb the wall at the factory where they make rock climbing accessories.
They enjoyed themselves!

Posted by Shelly Kauffman at 12:39 PM No comments: