As I sit at the airport, waiting to board my plane back to civilization, I'm thinking about more things to share with you from my week of adventures in Grand Cayman.


My girlfriend, Gwen, asked us to bring her back a bottle of Tortuga Pineaple Rum.


It's NOT available for her to purchase at Harter House or anywhere else that we know of locally, so traveling here or having a friend bring a bottle back is her only option. 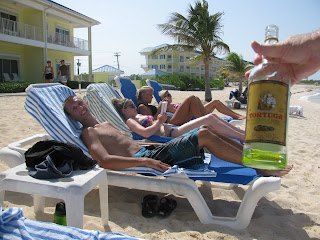 Unfortunately, for Gwen, we were so interested in trying it ourselves that we opened the bottle and didn't leave much for Gwen.

We did. however, pick up another bottle, and several more for ourselves, Duty Free just now at the airport.


I never really understood Duty Free, but I can tell you that we paid $30 for the bottle on the island and $10 for each bottle at the airport! We were informed of this and that's why we did not purchase another bottle till now!

So let me tell you a little bit about Tortuga Rum. Founded in 1984, Tortuga Rum Company has grown to become the largest duty-free liquor business in the Cayman Islands. Robert Hamaty, worked for the Cayman Airways and noticed that passengers boarding his plane were carrying Burmuda Rum. Thats when he decided the Cayman Islands should have their own rum too, and the idea of Tortuga Rum was culminated.

In 1991, Robert and wife Charlene, overcame many obsticles and setbacks, but pushed forward, seeing an opportunity to sell local products duty-free to visitors of the island, by both air and sea. The first duty-free liquor store was opened in 1987. 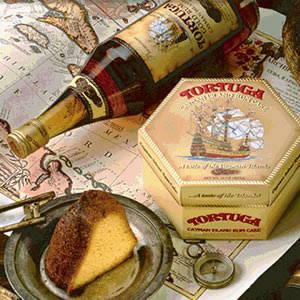 The Tortuga Rum Cake story officially began in 1987. It was at this time that Charlene started baking rum cakes at home, using a family recipe that had been handed down through generations. She of course used Tortuga Rum as the main ingredient. Encouraged by rave reviews from family and friends, the Tortuga Rum Cake made it's first "Public" appearance on a dessert menu of a local restaurant, and was an immediate hit. The demand for the rum cakes became so great that in 1990 a 1,700 square-foot commercial bakery was established. Tortuga Rum now consists of 11 different varieties and is now a global name, with a mail-order business, and it's also found onboard luxury cruise ships, to name just a few. From inception, the Tortuga Rum Company has become synonymous with one of the world's finest confections. The Tortuga Rum Cake is the Cayman Islands #1 export and souvenir item. And this compnay says it has has some amazing things still coming. YUM!!

I think I will try to get the Tortuga Rum Cake to sell at Harter House World Flavors!

Posted by Shelly Kauffman at 11:01 AM