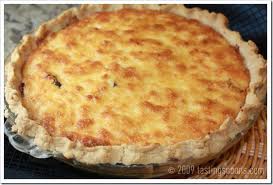 To say this pie is delicious is a gross understatement. The words of wisdom here are: sometimes the simplest of recipes are the best. This pie is nothing fancy – it contains onions, lots of tomatoes, fresh basil, cheese, mayo and some hot sauce. All piled into a pie shell in layers.


I started off with a mixture of tomatoes (red and yellow heirlooms plus a small pile of smaller tomatoes right out of our garden. The heirlooms were very moist – VERY juicy. And that can be the slight undoing of this recipe – you’ve just got to get out as much of the liquid as possible. It’s not that the pie won’t be good, but the bottom shell will be soggy. But I have a “fix” for it – next time I’ll add an extra step. More on that later.


Obviously, first you have to make a pie shell.
Make it easy and pick up a prepared pie crust at Harter House. 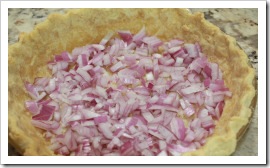 First went in the chopped raw red onions. Next time I’d chop them up finer AND I’d cook them a bit. The onions were still crunchy when we ate the tart after 40 minutes of baking. 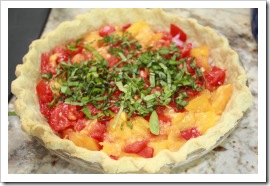 Next went in the chopped tomatoes that I’d drained on paper towels for about 15 minutes, AND I squeezed them to get out even more juice. I used about 3 1/2 cups for my large 9-inch pie plate.
Then I sprinkled in about 1/4 cup of fresh sliced basil leaves from our garden. 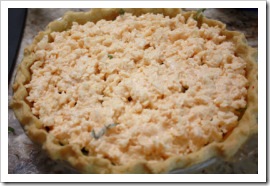 Next I mixed up an equal quantity (approximately) of shredded Gruyere cheese and mozzarella (not fresh), along with some bottled mayonnaise and a dash of hot sauce. Using my hands I pressed the cheesy clumps all over the top of the pie. I didn’t mash it down or try to make it a solid layer – there were a few holes. But they all disappeared during baking. Bake for 25-40 minutes or so until the top is golden brown. 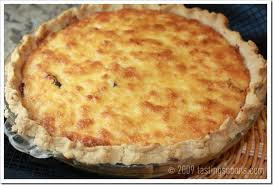 There it is, in all its gloriousness just out of the oven. We took it to our kids’ house and had it with some grilled Italian sausages and a delicious field greens salad topped with more garden-grown sliced tomatoes. Definitely eat it warm or hot. Next time I make this I’ll add a thin layer of cream cheese over the pastry – to keep the juice from water-logging the pie shell. And a word of caution: Gruyere is what I used here – it was beyond wonderful – but it’s a very salty cheese, so I might not add any additional salt. Mozzarella can also be very salty too.
The result? Oh gosh. Juicy. Creamy. Cheesy. Flaky. Tomato-y. All over perfection. Be sure to make this soon– before all the tomatoes are gone for the season.

Savory Tomato & Gruyere Pie
Recipe: Elise at Simply Recipes
Servings: 8 (maybe more like 6)
NOTES: NEXT TIME-I’ll spread a layer of light cream cheese (very softened) over the bottom and up the sides of the pie crust. It needs to be solid, otherwise the juice will leak through to the flaky pastry. If using Greyere, it’s a very salty cheese, so go very easy on the salt. Also, cook the onions just a little bit first.
1 whole pie shell — 9 inch
1/2 whole yellow or red onion — chopped finely
3 1/2 cups tomatoes — cut in half horizontally, squeezed to remove excess juice, roughly chopped, to yield 3 -4 cups
1/4 cup basil — sliced in thin strips
2 cups grated cheese — (combination of Gruyere and Mozzarella or sharp cheddar and Monterey Jack)
3/4 cup mayonnaise
1 teaspoon Tabasco sauce — (or more to taste)
Salt and freshly ground black pepper
Basil leaves for garnish
1 Preheat oven to 350°F. Place pie shell in oven and cook for 8-10 minutes or longer until lightly golden. If you are starting with a frozen crust, you’ll need to cook it a little longer. If you are using a homemade crust, freeze the crust first, then line the crust with aluminum foil and pre-bake it for 20 minutes, then remove the foil and bake an additional 10 minutes.

2 Squeeze as much moisture as you can out of the chopped tomatoes, using either paper towels, a clean dish towel, or a potato ricer. Squeeze gently in your hands, too, to get the last bit of juice out, without pulverizing the tomato flesh in the process.

3 Sprinkle the bottom of the pre-cooked pie shell with chopped onion. Spread the chopped tomatoes over the onions. Sprinkle the sliced basil over the tomatoes.

4 In a medium bowl, mix together the grated cheese, mayonnaise, Tabasco, a sprinkling of salt and freshly ground black pepper. The mixture should be the consistency of a gooey snow ball. Spread the cheese mixture over the tomatoes.

5 Place in oven and bake until browned and bubbly, anywhere from 25 to 45 minutes